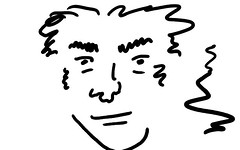 Ubuntu did something in Intrepid involving HAL and Xorg (yeah, meaningless? i think so) that meant that my tablet stopped working.

But I went back and hacked at my Xorg.conf file and read lots of documentation and email [fb]lame-wars between the HAL people, the linuxwacom people, the Ubuntu people, and the Xorg people, and I was able to rebuild things so that it worked again.

Here is my victory doodle. that wiggle on the right is the configuration bug bursting into flames from the heat of my intensity.