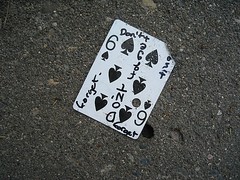 I found this card at the bus stop yesterday.

boobirdsfly reminded me that this sort of thing is a pretty powerful divination tool. The 6 of spades apparently indicates "Sorrows pass. Journey away from difficulties."

In addition, it can be:

... associated with the objectivity of scientific method, employed through the generations to sift fact from superstition, build facts into theories, and theories into Laws which we can trust and use to improve our lives. One early title for this card was The Navigator -- one who has learned enough about the relation between the Earth and the Heavens to be able to set a course across trackless oceans and arrive at a chosen spot on distant shores.


At the time of the first Tarot decks, this skill was considered akin to magic, so few were the individuals who understood the principles involved. So the person who draws this card is being typified as a person with special knowledge, an insight into sophisticated techniques that may be powerful enough to effect a rescue in a dangerous time. Other related titles that are common to this card are The Path (out of danger) and The Way Through.

"Don't forget: sorrows pass. Navigate away from difficulties, even as the navigation wisdom seems obscure magic." What a nice thing to have the world reminding me.
Collapse